The tabs above indicate the various sections of the AGM Report.

It is important to note that Amber Riel, Chair of the Board, is stepping down from that position and from membership on the board.  Amber has been an active member on the Board of Directors for years and has played a significant role in moving CDRJS forward as an organization.  She and her family moved to Creston a few years ago and while she maintained a strong presence and provided leadership, she made those contributions remotely via Skype.

CDRJS wants to express our thanks to Amber for her years of service and extend the opportunity for continued involvement in the future if her path should lead her back in this direction.  Thanks, Amber!

We have had a number of individuals express interest in being on the board.  Wendy Haley has accepted as a new board member.  Wendy was trained as a CDRJS facilitator, is an active member of the society and fortunately occupies the office across the hall.  She is a positive individual who shares the CDRJS focus of human dignity and equality.  I look forward to working with Wendy in this capacity. Thanks, Wendy!

We will hopefully be adding more members to the board during our next meeting in April. Stay tuned!

Comments from Debbie McPhee and/or Amy Cross, Program Contractor for the Humanity Network

2019 Approval of Membership9.     Election of Directors

The Membership represented by those present at the AGM 2018 resolved to accept the Agenda as circulated.

The Chairperson’s Report was presented by Amber Riel and Doug McPhee.

The Membership represented by those present at the AGM 2018 resolved to approve the Minutes from the AGM 2017 as circulated.

The Membership represented by those present at the AGM 2018 resolved to approved the 2018 Budget as presented by Doug McPhee.

The Membership represented by those present at the AGM 2018 resolved to appoint Redding and Associated to provide accounting services for CDRJS for the 2018.

Applying for Membership:  Please refer to cdrjsociety.ca and the tab “Membership”

The Terms of Office for Avery Hulbert, Amber Riel and Don Kawano concluded with AGM 2018.

Don Kawano has indicated that he doesn’t wish to stand for re-election at this time.  We wish to extend our thanks to Don for his many years of valued service to the Board. We will look forward to Don’s future contributions in the capacity of facilitator.

The Terms of Office for Kevin Ward, Carla McDonald, Brandon Veenstra and Rachelle Golding will conclude with AGM 2019 and be open for re-election at that time.

Rachelle Golding has resigned her position on the board as she enters a new venture in employment.  We wish to thank Rachelle for her contributions to the board and wish her great success along her new path.

Carla McDonald is also venturing along a new path and we wish her thanks and great success in the future.

Avery Hulbert and Amber Riel were nominated for the positions of  Director on the Board of CDRJS.

Avery Hulbert and Amber Riel accepted the nomination to the Board of CDRJS.

The Membership represented by those present at the AGM 2018 resolved to accept the Avery Hulbert and Amber Riel as Directors on the Board of CDRJS.  The term of these appointments will conclude with AGM 2020 and be open for re-election at that time.

Our thanks again for volunteering and we will look forward to greater success in 2018 with the support and guidance of this talented and dedicated board.

The Membership represented by those present at the AGM 2018 resolved to adjourn AGM 2018 at 5:47 PM

Cranbrook and District Restorative Justice Society would like to thank all those who had the opportunity to attend the 2018 AGM.  As always, we welcome those who are willing to make a contribution to our society, in any and all capacities.

Report from the Board Chair

"To accomplish great things, we must not only act, but also dream, not only plan, but also believe"

We have accomplished a great many things because we dared to dream and had an unwavering belief in our vision.  To restore is to put back to one's original condition, we strive not to restore but to take adversity and build resilience.  In fostering resilience, the focus is on building capacity, empathy, and caring.

As an organization that embodies all that resilience stands for, we have made a concerted effort to build upon strategic priorities that support growth and change in a meaningful way.  One such example is the tremendous opportunity embraced when joining forces with the East Kootenay Humanity Network.  Another example is the collaborative efforts undertaken in reaching an MOU with the Ktunaxa Nation Council to support restorative practices.  We all win when we work together towards a greater common good.

We wish to extend our heartfelt gratitude to our volunteers, members, funding bodies, board of directors, and referral agents. A huge THANK YOU goes out to our devoted program contractors Doug McPhee (CDRJS) and Amy Cross (EK- Humanity Network), thank you for keeping the ship floating and on course!!

We are always looking for new energy to join our team, and help us carry out this important work.  We are currently seeking members for the board and invite you to try it out!!

"To the world, you are one person; but to one person you may be the world"

CDRJS has signed another agreement with the Ministry of Safety and Solicitor General to deliver Restorative Justice in this region (Community Accountability Program).

There has been ongoing discussion and involvement of restorative justice societies across the province as to how the government can support the commitment they have made to improving access and quality of restorative services.  I have been fortunate to have been involved in some of the discussions and will look forward to future engagement and growth.

November 2018 was an exciting month.  The Societies Registry for British Columbia brought in new expectations concerning the Constitutions and Bylaws (C/B) of not-for-profit organizations. Revisions to our C/B started in early in 2018 with an eye on the deadline at the end of November 2018.  Outside of adopting consensus as the decision-making process for CDRJS, little had been done with the C/B since they were originally filed in 2007.

Thanks to the input and direction of our Board, the task was successfully edited to reflect our current practices and goals – and submitted in a timely manner.

EKOHDE was formed in 2002 to address and support the growth of Human Dignity and Equality.  In 2010 a network of local support agencies called the Humanity Network of the East Kootenay was formed.  The purpose of network was to determine current trends and topics for community engagement.  Over the following 9 years there have been events held on a range of subjects from Human Rights, to Equality, to Truth and Reconciliation.

Restorative practice and the work of CDRJS has been focused on restoring human dignity and equality among those who have been negatively affected by crime.  The application of those goals have been in a very practical, hands-on approach manner through providing restorative justice facilitation, training and public awareness.

In 2018, a request was made to CDRJS to provide administrative support for the work of EKOHDE and principally the operation and coordination of the Humanity Network – public engagement supporting Human Dignity and Equality.  The Board a services contract with Amy Cross, Program Contractor for the Humanity Network and an MOU (Memorandum of Understanding) with the retiring board of EKHODE.

Through the work of the Humanity Network and Amy Cross, this week and the communities of the East Kootenay, will benefit from the presentations of Bob Sandford, in support of the United Nations World Water Day.

OARH (Organizing Against Racism and Hate)

OARH groups have been established in a number of communities in British Columbia.  The intention of OARH is to provide a process of communication and collaboration between local service providers, the local RCMP and Race/Hate Crimes Unit of the RCMP.  In addition, funding is provided to develop community capacity, skills and support positive community engagement.

CDRJS continues to celebrate and support the MOU signed with KNC.  There has been some positive  collaboration during 2018 and we look forward to sharing a common path.

The City of Cranbrook has provided a grant again this year to support the work of CDRJS in the community. We are very grateful for this support and for the recognition that extending this grant provides.

This has been a very frustrating year and our website has been under the constant attack from acronyms.  The first of which came from the unlikely SSL.  Ever wonder why some sites have http:// while others are https://?  The difference was originally brought about by need for e-commerce – buying things on the internet meant that there need to be greater security for the eventual credit card data that would be exchanged; https:// was invented to secure that data and connection.

Our website never collected credit card information, BUT I guess that was as important has having everyone conform to a new standard.  Unfortunately, our site went down while additional support and permissions were purchased.

The next attack was PHP. The curious bit is that PHP was developed to make things easier.  An updated PHP, one would think, would be much more friendly than the previous intervention – easier than easy.  Not the case and a waiting period was inforce while easy became easier.

The end of the rant – we now have two sites up and running.  Please have a look when you get the opportunity:

Your suggestions for future articles on either site would be greatly appreciated.

Report from the Humanity Network

The transition from the East Kootenay Organization for Human Dignity and Equality is almost complete. The new Humanity Network web site has been launched. The main initiatives being undertaken include Organizing Against Hate and Race (OARH), the Humanity Network, and the Cranbrook Hate and Race Based Incident Response Protocol.

With the support of Cranbrook and District Restorative Justice, The Humanity Network has held a number of very successful events. In May 2018 the Humanity Network hosted Senator Murray Sinclair in celebration of United Nations International Day of Happiness. Senator Sinclair presented on the theme What Does Happiness Mean to You highlighting the need for reconciliation in Canada.  In March of 2019 hosted Bob Sandford in recognition of United Nations World Water Day.  The theme was What Does Water Mean to You highlighting climate change and the importance to water in the world.

a) Offender is taking responsibility for their actions and is willing to address the harm done to others,

b) Severity of crime is deemed appropriate for a restorative process. Typical referrals for restorative processes are those for which the offender may receive fines and community service if the referral would proceed through court.

The identity and agreements reached as the result of a restorative justice process are confidential.  The following data discussion is based on non-identifying information only.

Total of 30 files for this period 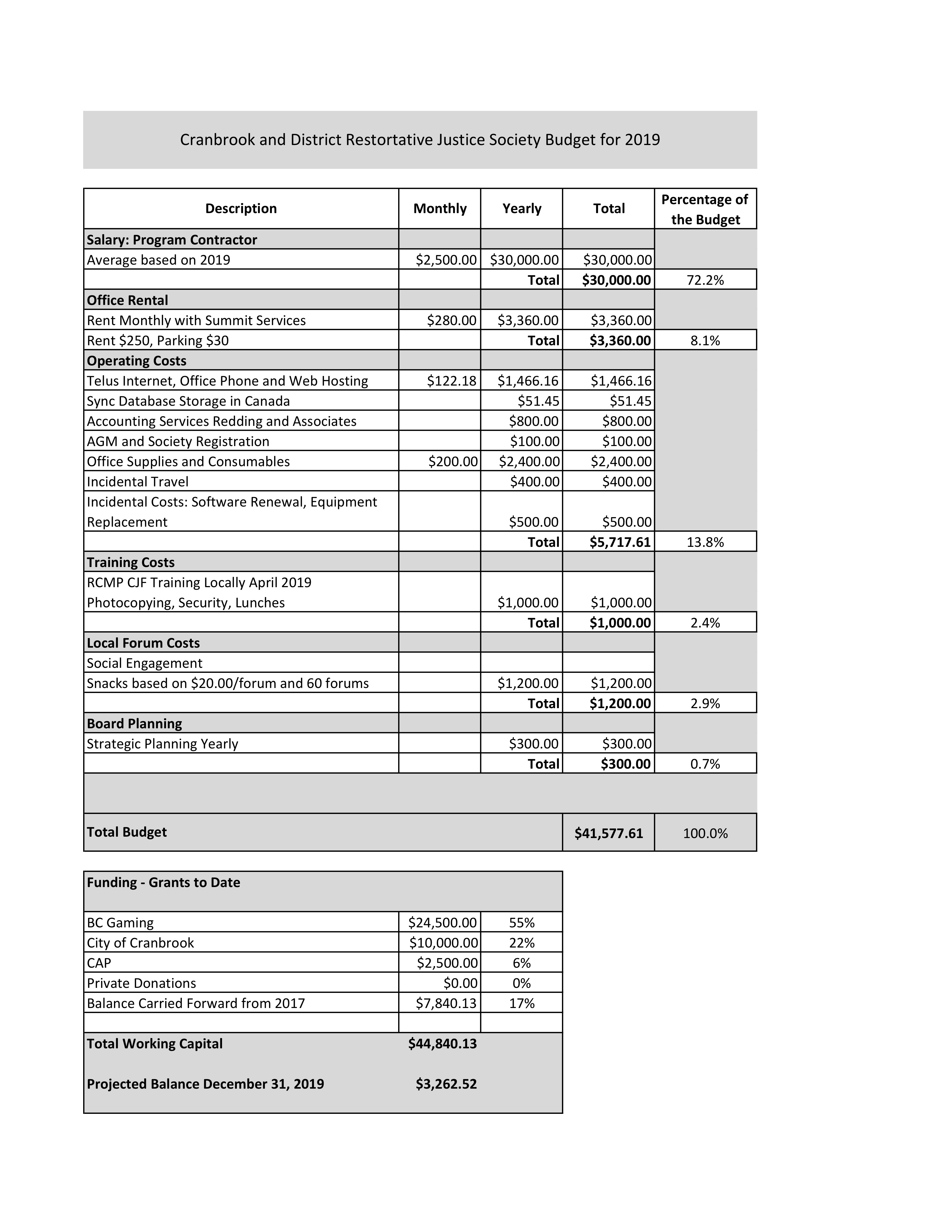 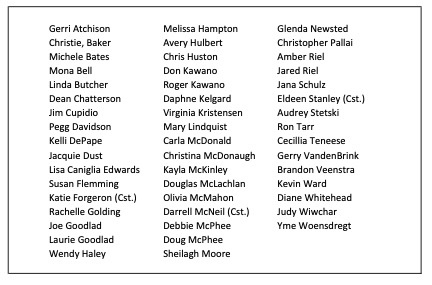 (as of the date of this report)

Thanks for the Support:  Community Partners, Provincial Ministries and Support for CDRJS
Please Donate

Cranbrook and District Restorative Justice Society is a Not-for-Profit organization which relies on grants and donations in order to support the our valuable contribution to the district.  Your donations will enable CDRJS to train facilitators, offer public education and awareness, operate the office and support the community by providing restorative justice as an alternative to traditional court processes.

Thank you in advance!

Other times when required

The organizational and administrative services for the East Kootenay Humanity Network and the Hate and Race Based Incident Response is provided by Cranbrook and District Restorative Justice Society.